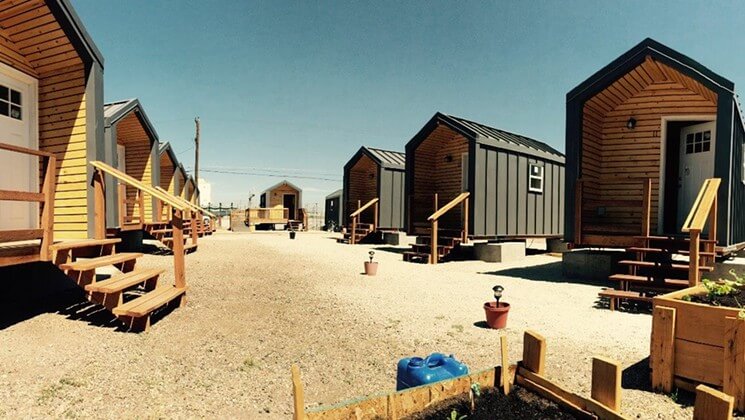 Tiny home villages are months away from finally getting their own home in the Denver zoning code.

On Wednesday, June 5, during a public meeting, the city unveiled zoning-code updates for tiny home villages that will be implemented in the fall. The changes will finally lay out a straightforward, albeit temporary, path for building tiny home villages, which can provide housing to people experiencing homelessness. Four representatives of the Colorado Village Collaborative, the group behind the tiny home village in Globeville, were in attendance, as well as multiple city officials, including representatives from Community Planning and Development.

Before they apply for a permit, organizations interested in building a tiny home village will have to meet with residents and neighborhood organizations in the area they’re eyeing for the project. These meetings would give both sides a chance to work on crafting safety protocols, the resident application process, and a way to resolve disputes that might arise in the village.

The city is also working on a more permanent zoning permit for tiny home villages, but that won’t be ready until sometime next year.

The zoning-code updates, which have been in the works for about a year and a half, allow organizations to build tiny home villages in almost every neighborhood, with a few caveats. The homes will not be allowed on conserved land, and in residential areas, a tiny home village must be attached to a church, school or some other type of community building.

The city, in collaboration with councilwomen Robin Kniech and Debbie Ortega, is also updating the zoning code to accommodate a variety of other group-living situations, such as homeless shelters and sober-living facilities.

Kniech said during the public hearing that she pushed the temporary permit to address the urgent need for housing in Denver. The Beloved Community Village, the only tiny home village that currently exists in Denver, just moved from RiNo to Globeville, despite pushback from some residents there.

“We’re going to move it ahead of the rest of the package so we can get more folks into these units quicker,” Kniech said.