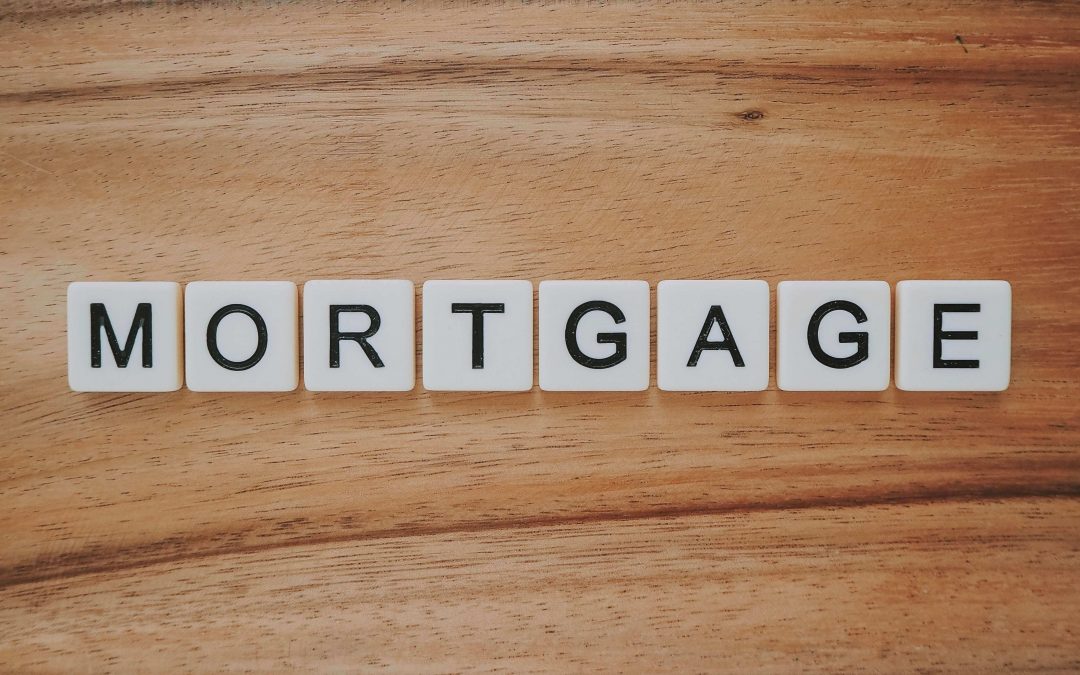 Everything’s relative when it comes to mortgage rates. For every homeowner that’s been concerned about a short-term increase in rates, there’s another who’s glad to remind them how high rates used to be.

At the moment, with top tier 30yr fixed offerings hanging out under 4%, it’s hard to be too concerned about where we are today.  But fretting over the future is always fair game. With that in mind, let’s repeat a chart from the previous newsletter that showed the long-term trend in rates (as represented by 10yr Treasury yields–the benchmark for all longer-term rates in the US).

In other words, rates had a stellar run from long-term highs, ultimately bouncing near all-time lows.  The last two times this has happened, it marked a big picture turning point that ultimately restored long-term highs.

A repeat performance is always possible, but there are a few things worth noting.  First off, the other two examples both relied on a catalyst event for the majority of the momentum back toward higher rates.  In 2013 it was the Fed signaling an end to QE (the bond-buying program that had helped rates realize all-time lows only a few months prior).  In 2016 it was the market’s reaction to the presidential election.

So far, we don’t have an equivalent sort of motivation, just the initial corrective bounce that seems to be common for all 3 examples.  To be fair, that motivation could materialize simply due to strong economic data and a solidified US/China trade deal, but neither is a given at this point.  Conversely, there’s no rule that says rates can’t turn right back around and head lower again.

That sort of friendly momentum can come from things like geopolitical risks and disappointing economic data.  It can even be as simple as traders seeing a show of support at any given ceiling level for rates.  1.95% in 10yr Treasury yields filled that role at the end of December (as seen in the chart below).  By the end of this week, that supportive undertone was joined by geopolitical risk (escalation in US/Iran relations after a drone strike killed Iran’s top military leader) and weak manufacturing data on Friday morning.

If December looked like a dicey month for rates, remember, everything’s relative when it comes to mortgage rates.  While it’s true that Treasury yields set the tone for overall rate momentum, mortgage rates are ultimately based on mortgage-specific bonds that can move a bit differently at times.  December was one of those times–something we can easily see if we chart the movement in mortgage-backed securities versus Treasury yields. 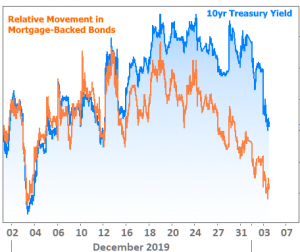 The takeaway there is that mortgage rates were already near their lowest levels in a month a few days before Treasury yields experienced their biggest recent drop.

Why was the mortgage sector able to outperform Treasuries?  There are several fairly boring, confusing reasons for that, but one fairly simple one.  So let’s stick with what we know (i.e. everything’s relative for mortgage rates, and this is no exception).  Simply put, mortgages were able to outperform Treasuries because they had underperformed so badly in August and September.

Explaining past movement is one thing.  Getting ahead of the next big move is another.  To reiterate, there’s certainly a concern about history repeating itself as seen in the first chart, but again, it will take a catalyst.  Progressively stronger econ data in 2020 would do plenty of damage to rates, but there’s no way to know if that’s what we’ll see until we see it.

When it comes to deciding on what to watch, next week is a great candidate.  It has a slew of the most important monthly economic reports, and it occurs on the first full week back from holiday breaks for many market participants.  There’s also a high probability of additional headlines over the weekend that speak to geopolitical risks.